Quartz Scheduler is a richly featured, open source job scheduling library that can be integrated within virtually any Java application - from the smallest stand-alone application to the largest e-commerce system.

Every developer at a certain point in his carreer is faced with the difficult task of scheduling jobs dynamically. In this post we are going to create a simple application for dynamically scheduling jobs using a REST API.
We will dynamically create jobs that sends emails to a predefined group of people on a user defined schedule using Spring Boot.

At the end of this guide our folder structure will look similar to the following:

To follow along this guide, you should have the following set up:

Before we dive any further, there are a few quartz concepts we need to understand:

Create and Setup Dependencies for the Sample Application

Head over to start.spring.io and build a Spring Boot template as illustrated in the image below: 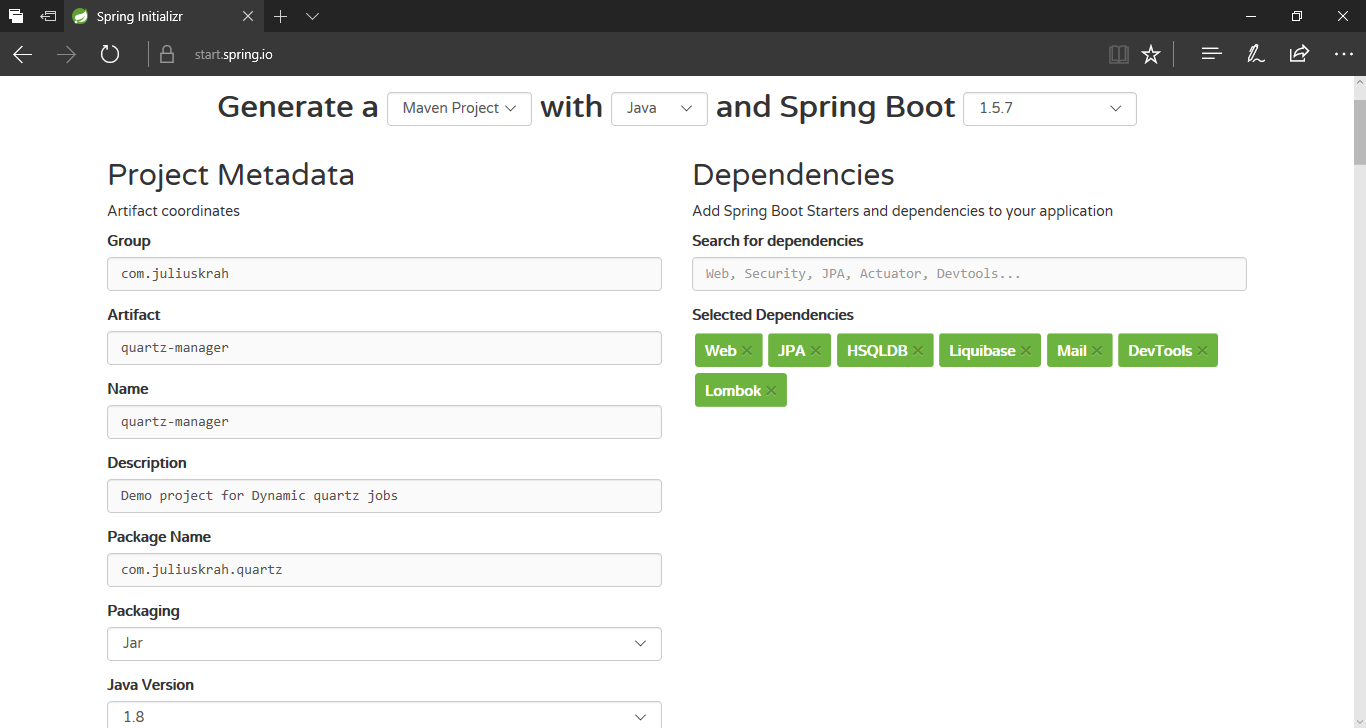 Download the zip archive and extract the contents to a folder of your choice. Open your pom.xml located at the root of the template directory and add the following dependencies:

The above are the dependencies needed for Quartz with Spring integration.

By the end of this post we will be able to schedule Quartz jobs dynamically to send emails using a REST API.
We will create jobs:

JobStore’s are responsible for keeping track of all the “work data” that you give to the scheduler: jobs, triggers, calendars, etc. Selecting the appropriate JobStore for your Quartz scheduler instance is an important step. Luckily, the choice should be a very easy one once you understand the differences between them.
You declare which JobStore your scheduler should use (and it’s configuration settings) in the properties file (or object) that you provide to the SchedulerFactory that you use to produce your scheduler instance.

There are three types of Jobstores that are available in Quartz:

Setting up the Descriptors

In order to set up the REST API for the dyanmic jobs, we will create two abstractions over JobDetail and Trigger aptly named JobDescriptor and TriggerDescriptor:

Next we will define our Job class:

The JobDataMap can be used to hold any amount of (serializable) data objects which you wish to have made available to the job instance when it executes. JobDataMap is an implementation of the Java Map interface, and has some added convenience methods for storing and retrieving data of primitive types.
You can retrieve the JobDataMap from the JobExecutionContext that is stored as part of the JobDetail or Trigger.
The JobDataMap that is found on the JobExecutionContext during Job execution serves as a convenience. It is a merge of the JobDataMap found on the JobDetail and the one found on the Trigger, with the values in the latter overriding any same-named values in the former.

The bean definition above is doing several things:-

Creating Some Service and Controller Classes

We will create a service class that will take care of Creating, Fetching, Updating, Deleting, Pausing and Resuming jobs:

and test the create endpoint http://localhost:8080/api/v1.0/groups/email/jobs via post using curl or Postman with the following JSON payload and content type application/json:

This will execute every 10 seconds by printing to STDOUT.

Update at http://localhost:8080/api/v1.0/groups/email/jobs/manager with content type application/json and payload:

Create a configuration file and add the SMTP details of your mail server which defines the behaviour of the JavaMailSender bean. We will inject this bean into the job class:

One thing we did not talk about, the AdaptableJobFactory does not do any dependency injection. Each (and every) time the scheduler executes the job, it creates a new instance of the class before calling its execute(..) method. When the execution is complete, references to the job class instance are dropped, and the instance is then garbage collected. One of the ramifications of this behavior is the fact that jobs must have a no-argument constructor (when using the AdaptableJobFactory implementation). Another ramification is that it does not make sense to have state data-fields defined on the job class - as their values would not be preserved between job executions.

It is at this point that things get interesting. We will create our own implementation of JobFactory that supports dependency injection:

Now inject the JavaMailSender into the job class:

In this post we learned how to schedule quartz jobs dynamically using RAMJobStore. In the next post we will learn how to persist these jobs into the database using JDBCJobStore.

You can find the source to this guide in the github repository. Until the next post, keep doing cool things